what a week of good news and some bad news...

This has been such a full and crazy week....go get your cup of tea ...this is going to be a long post! Just to get it out of the way..I will give our bad news first. We got a phone call fromArt's sister Judy about Art's (Art is my husband) brother Bob...Bob had gone into the hospital to get his gall bladder taken out and while in there doing the surgery the Doctor saw that his liver was fully spotted. His guess was a full blown, advanced case of liver cancer. Ugh! We have been such a state of shock~ Bob is only 57 and has never had any health problems his whole life. We got a glimmer of hope today. The doctor told Judy that there is a 20% chance that it could be something else...non cancer...some sort of scarring or something. So we won'tknow for sure until the biopsy results come back. So please any of you reading this say a prayer for Bob! He is a sweet man and it would be nice to have him around a while longer. We are making a fast trip over to Pittsburgh this weekend..leaving Saturday morning and coming back sunday night.

Okay to cheer things up now....I subjected Oscar to some Christmas cheer..they say laughter is the best medicine after all....he is probably thinking...."why mamma?..why do I have to do this stuff?..it itches" he also is telling you Merry Christmas 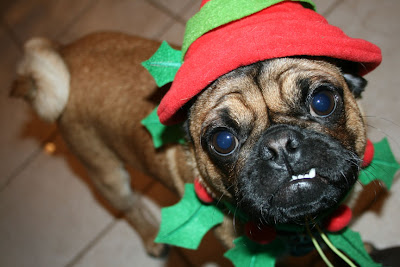 So lets see what has been packed into this whirl wind week...Ah tueday night the Christmas program at the kids school...Turner is way in the back on the right side...5 kids over without his hand to his head... 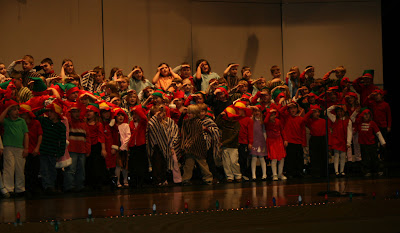 I had gone to good will last week and found all sorts of fun things..lots of thing ready to wear and a pile of things to alter into things to wear. With all this extra weight on me...that i do cry about at times...leaves me frustrated so much...But, I have decided that I am going to play with my outfits and look as fun and nice as I can....I have gotten caught up into this craze over on flickr called remixing..remix outfits are usually with some sort of vintage or thrifted piece or two or twenty. Here I am also wishing every one a happy holiday~oh I made the earrings out of buttons...modeled after a pair of off white ones I found at Salvation Army 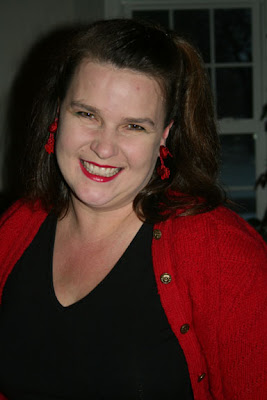 Here is my fun plaid skirt..that cost around $3....with a top for $2.50...layered with a sweater from Goodwill from many years ago...leggins from target and fun striped socks underneath.. 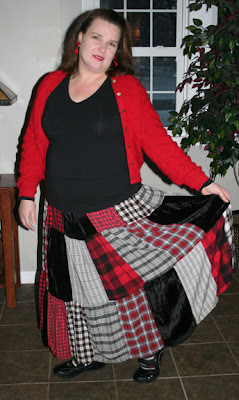 I actually got a tiny bit of art done...my cover of my RR book...My story is about a child vampire named Amelya...this is her journal she has kept for the last 200 years. I have the backgrounds done..just need to add my artwork... 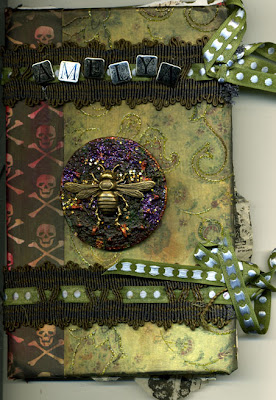 Last night was cubscouts..they had their Christmas party and Turners troop had to do the flag ceremony to earn one of their badges. Originally the party was for tonight..but we had bad weather last week and everything got switched around..so at 4:15 yesterday I found out that the party was moved from our school tonight to the other elemetary last night..ACK!!!! I had to make 4 sashes for the color guard and his scroll for his part, Turner had to make his flag and I was still smelly and sweaty from the gym earlier...we had to be there in 1 1/2 leaving 15minutes travel time...so in 40minutes I made all of this: 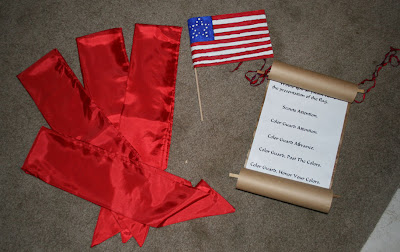 These are the times I thank God that I am good at what I do...

so after that I showered and sticking to my fun clothes pact to myself, I came up with this outfit..inspired by the shoes....and the cool skirt I had found on my trip to GW...you know it is about the shoes..always the shoes... 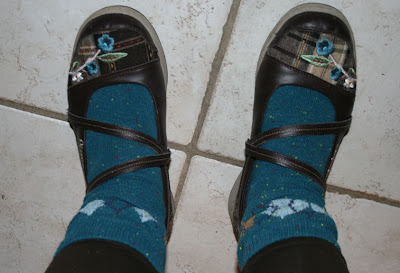 see the cute owls on the side! 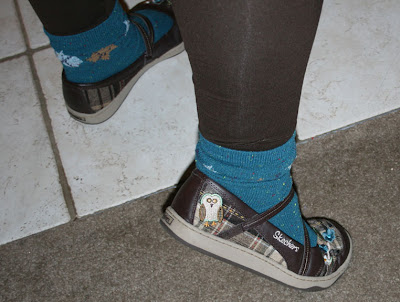 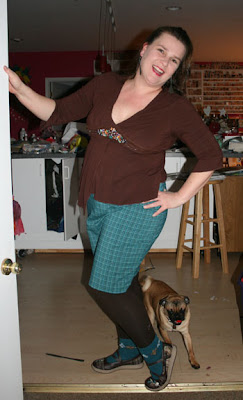 This week also came with one of the most exciting things ever...I had been asked by Stampington.com(publisher of many many cool magazines including my all time favorite Somerset Studio) to create a project with two of their new products. I created the project withing two days...and turned around sent it back...they used it to introduce their new product of the week...Originally it was to be featured in their weekly smaller Creative Impulse newsletter..but when i emailed a preview and scans they asked me to overnight it to include in their monthly huge newsletter...I am their featured artist...WOW!!!!! I amstill blown away by this~
Project of the Month"ATC Calendar"by Angela Hoffman
Angela Hoffman’s magnificent artwork has been featured on the pages of many Stampington & Company publications. As our Featured Artist for this issue of Post Script, she has created an “ATC Calendar” that will keep you inspired all year long! Her beautiful calendar was made with brand new products from The Shoppe at Somerset, which are being offered exclusively to our Post Script subscribers at a 5% discount before their official release on December 14th. Click here to see the instructions for Angela’s project, and to purchase the featured products before they become available to the general public!
actually click here for real 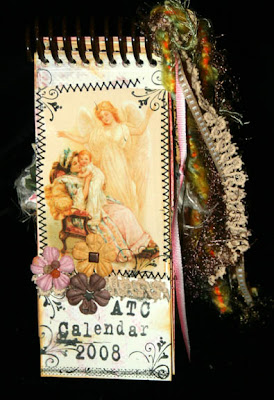 oh some days...when life is just hectic and out of control...you find a moment of Grace...a quiet moment, when something in nature gives you a tiny touch of God..where you just have to stop and take a deep breath and say "AH!!! this is the miracle of life"...this was one of the most beautiful sunsets I have ever seen~ the contrast of the deep blue with orange horizon just took my breath away...i was pumping gas on my way to Turner's pack meeting and turned around...and WOW!!!~ 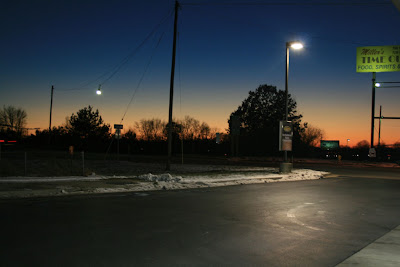 here is Turner fulfilling his color guard drill sargent duties..I was so proud of him! 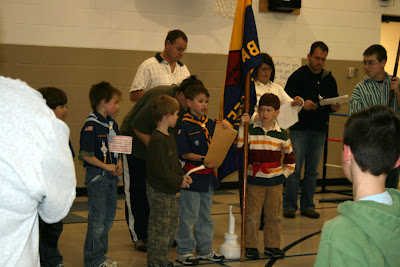 and one last giggle...Oscar revisted in his elf costume...he cracks me up!~ 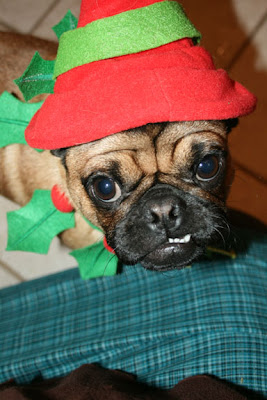 and to all a goodnight!
xoxox
angela
Posted by Angela Hoffmann at 7:31 PM

Angela, I'm keeping my fingers crassed and saying prayers that your BIL comes out of this with good news. God be with you on your week-end trip.

You have to know that I think Oscar makes an adorable elf.

You certainly are on a busy scedule with the kids; so it's great that you snuck in some time for a fun wardrobe. I applaud your resolution for fun clothes.

Angela, I adore your *fun* sense of style ... wish I had the nerve (or legs) to pull off those leggings! I used to live in leggings many, many lbs. ago! Congrats on the feature for Stampington, the ATC calendar looks beautiful. Oscar is adorable, so are you .... hope your BIL finds out it's something treatable. Prayers, hugs, and best Christmas wishes your way!!!

Hi Angela, believe it or not I read the whole thing. What a great way to keep up with you guys. Sorry about your BIL. Hopefully it turns out to be something homeless.

You look great in your "new" fun outfits. I can't believe how young you look. Must be in the genes lol. I did not know Turner was in the Scouts. Does he enjoy it?

Dennise is that you?..i am wracking my brain on who is D?
let's see Darlene?...ah...that is it on D names for the moment...hhhmmm

Angela, your adorable in whatever you wear!! I'm keeping good thoughts and prayers for your BIL! Poor Oscar LOL

Hey stop by my blog and see the Christmas Tree gift box I made with your Dream Street papers! It turned out so cute!

Congrats on being published in the Stampington newsletter... that is awesome girl.. love the ATC calender too!

Congrats! What a lovely calender and how great are YOU????? :)