But with some good stuff!
On May 19th! Jonathon celebrated his 6th birthday! 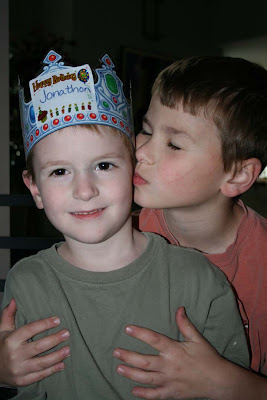 On May 28th Art celebrated his 53rd birthday...we didn't take pictures...but i did make him a delicious potroast and apple crisp in celebration!

Spring has sprung around here...along with that comes opening the pool...this is afteward..it resembled a very murky duck pond when the cover came off! 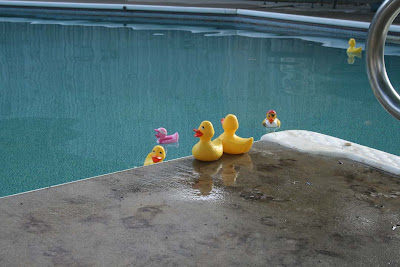 and another chore...fortunately i was able to enlist Ashton to help...is mucking out the ponds...we basically had to redo the entire area the little boys made a mess of them trying to catch frogs...so many rocks were at the bottom of both... 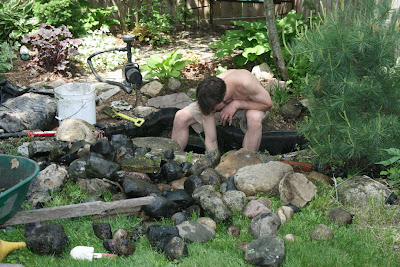 it looks so pretty now...and it seems there are no leaks!~ yay! I will turn on the system sometime this weekend to see if it all works 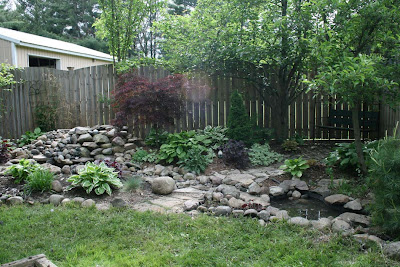 We have been enjoying rounds and rounds of blooms everywhere! This is such a pretty Rhododendron on the back of the house 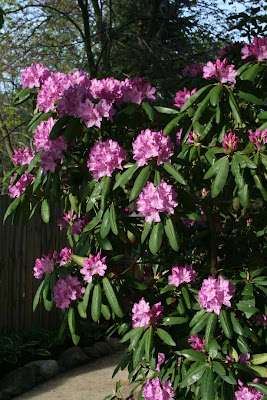 i was fortunate enough to capture a beautiful picture of the white bleeding hearts..among many many other pictures of the various flowers...need to go out and get some more of the lilacs and the irises 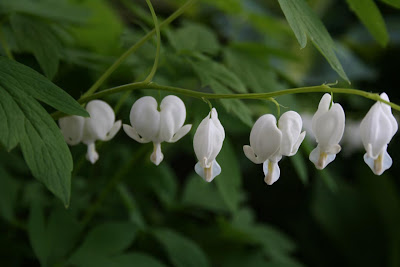 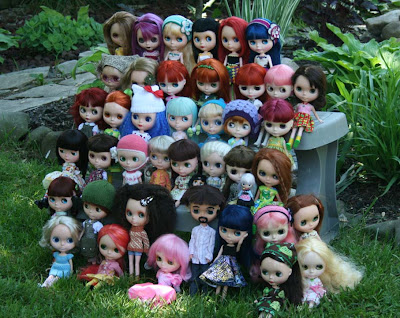 lots of dollies in my studio.. 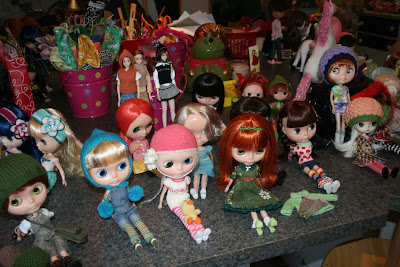 This is Chris....she is holding up one of gina's darling hats...it is a cupcake hat!~ 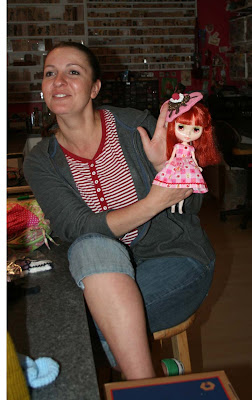 Here are the dresses my girls ended up with...lots of trading going on that day~ 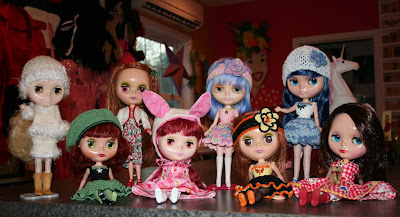 we traded dresses for a new house....and we also got a suprise in the mail from Auntie Kari...she had gone to an antique store and a lady there insisted this girl was a Blythe...well after sending photos to me..we realized she wasn't after all...i thought she looked south American..so we named her Evita...she is our foriegn exchange cousin from Brazil..she is getting along nicely with al of the others...here she is meeting Anni and Arturo 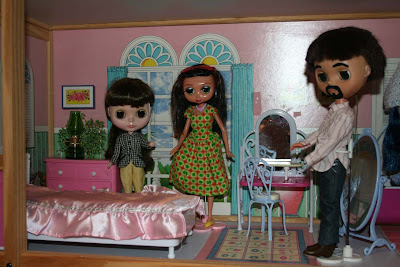 Bridgett is enjoying her new bed in her bedroom of the new house...dress is a trade from Morgan~ 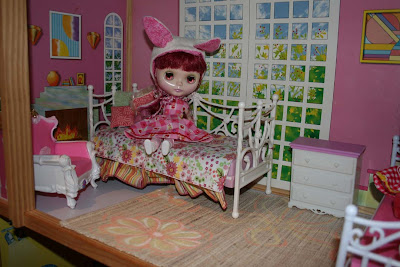 Koneko was exploring the new bathroom and found a suprise in the shower...the Sonny Angel boys seem to be able to get to the new stuff first...here they were trying out the shower..Scarlett isn't sure what to think of these similar sized fellow... 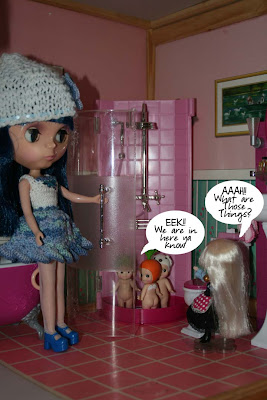 Anni and Arturo finally got to go on their horseback riding date...they were so patient with me...we had so many things going on..there is love in the air...i think they are planning another date soon..i heard something about fishing maybe..i am so suprised since Anni is always such a girlie girl..must be that she wants to please Arturo 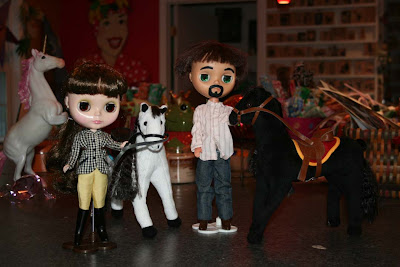 the family welcomes a new sister.... 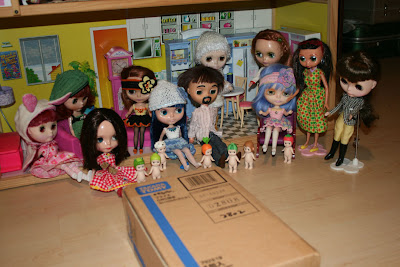 I think her name is going to be Rickie~ I misunderstood a comment on my flickr stream...he said he could see her calling "ricky"(as in Lucille ball)...but i thought he meant to call her Rickie!...so i think it is going to stick...she looks like a Rickie to me~ 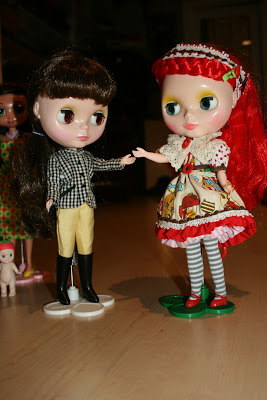 yesterday i looked down at my mini collextion right here by my computer...thought it was so cute..and funny that there is actually a doll smaller than Scarlett...a tiny mini barbie baby...Scarlett has decided it is her babydoll even though she thinks she is a bit weird looking...rofl! and she has threatened to turn them all into mice if they don't behave! 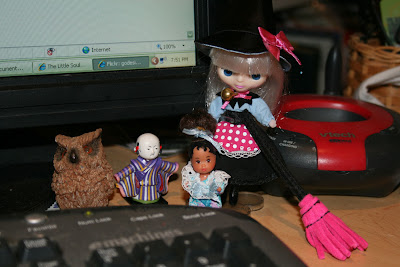 Mixed in with all of these events at home we have been enjoying some...well 4 field trips in the past 3 weeks...i have to resize pictures from the other three...but here was last weeks trip to our local bird sanctuary with Jonathon's kindergarten class. The other trips were the ford museum/Greenfield Village with the 5th graders 3 weeks ago, this week Tuesday was the Kindergarten train trip and the 2nd grade trip to Charleton park..an historical village

Here is a swan family at the Bird Sanctuary 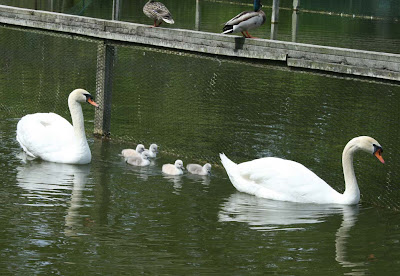 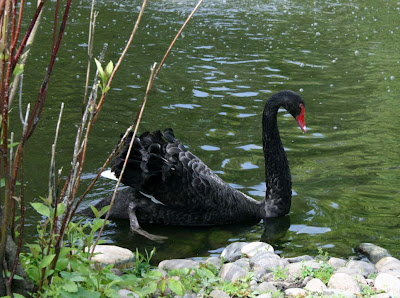 and my little bird Jon!..he is always so sweet~ 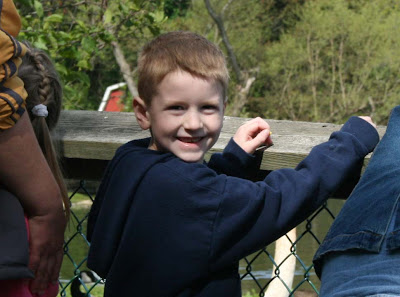 well a brief recap of what life has been....i also created another project for Stampington.com the day before yesterday...will post as soon as the newsletter goes out~
have a most wonderful day...and i hope i didn't bore you to tears
oh one more thing..the whole fire thing with the neighbors blew over. Matt and Michelle had gone to the township office to inquire about a building permit..and talked about the incidents. they found out that we did nothing wrong other than the first time not attending the pile at all times. We didn't even need a burn permit for the kind of fire we had...so we are not in any trouble. I had taken some photos of the 'pita' neighbor's fire that had 7 foot high flames a couple of days after the incident..they want us to bring them down at some point..They also said that these particular neighbors have caused problems in the past. so i feel so much better that we aren't going to get fined or be in trouble and that we weren't imagining things about these neighbors..i hate stuff like that hanging over our head. We plan on installing security cameras just in case the neighbors try anything again.
so life is back to it's happy self! today i have to clean and fold laundry and birthday shop for Tyrus' 11th Birthday tomorrow...he is having a party..no sleep over though..phew! and Sunday i am going to the ZNE castle event with Gina over by Detroit! that will be fun...and Gina is such a doll!
xoxox's

Posted by Angela Hoffmann at 8:44 AM

the little dude doll with the goatee cracks me up!!

Angela, your brood keeps you busy, don't they? I enjoyed the pictures of your garden. I just planted some white bleeding hearts, and I'm really looking forward to them next spring. (It's no longer spring here - it's hot!) I must confess I don't get the whole Blythe doll thing, but it sure looks like you all had fun.

Okay girlie- I'm envious! All I was able to get done was lying on the couch this weekend recovering! You had enough fun for both of us it looks like. So glad your neighborhood stuff worked out. Oh and one more thing....You are going to HAVE to quit making the blythe dollies look so fun! They are NOT in my budget right now!!!

Love the ducks in your pool. What a batch of birthdays you have all at once! The garden looks great. It looks like the Blythe dolls had as much fun as their owners; I bet it was a great gathering. I know you and Gina are going to have a great time at the art retreat; I hope you post photos and descriptions.

I enjoyed my visit to your blog! You've been one busy woman! Love the Blythe dolls - the guy one is such a character!
Your pool and pond and yard are all lovely! And your boys are darling!
Congrats again on the Postscript Paper Doll Mobile - I just received their email!
hugs,
jackie

I enjoyed my visit here. Your 2 boys are such cuties. Love the bird pictures and the doll convention, what fun!Your yard looks beautiful.

I AM A Scrapaholic said...

There are some amazing photos here!
I hope to see you at CHA!

Your yard is beautiful! TFS